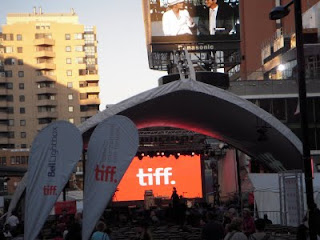 This evening I saw the movie “Scheherazade, Tell Me A Story” at the Varsity cinemas (9 PM) at the Toronto Film Festival. I will be honest, there were hundreds of films being screened at Toronto and the reason why this one landed up on my list was the title, which implied a sort of fantasy tale based on the famous Persian story of Sheherazade. I am not complaining, but this is not what the movie turned out to be about.

It is a film shot in Egypt about the plight of several different female characters. The lead actress is a talk show host and other characters are folded into the movie using the somewhat tired device of different female guests speaking up at the television talk show. As the movie progresses, each of them reveals her life story. Each woman has been in some form abused, oppressed or poorly treated. Guess who lands up talking about her plight at the talk show in the closing scenes of the movie.

As a film, it seemed oddly stuck (in its tone, in its use of colors, in the basic flow structure of the stories) in the emotional sensibility of movies from a few decades ago, movies with a particular moral rigidity. It reminded me of the preachy, moralistic tales that were de rigeur in Indian cinema in the fifties and sixties. What is ironic is that this movie is actually lobbying for a more progressive way of thinking around women’s rights in Egypt. It is difficult for the film to demonstrate a progressive spirit when the movie reminded this viewer of retrieved footage from a film made at a time when women were literally kept under wraps. If you are creating a movie that is making the case for breaking traditional and oppressive rules, why choose to make it in a traditional and oppressive style? Would it not have been better if the filming, editing, the entire treatment of the material were handled in a modern style, with cleverness, with wit, with energy?

Of course the intentions are noble. But for me there were two things that primarily prevented me from connecting with the movie. One was the general overwrought treatment of the subject matter. There was nothing of much subtlety here; what could have been handled by a simple look was often amplified with obvious dialog. And secondly, while I have nothing against overtly feminist subject matter, this one has every single one of the male characters be so utterly rotten, that the film loses objectivity and starts to seem like a diatribe.

Those complaints aside, what made every film watching experience at Toronto a treat was the Q and A session with the director at the end of most movie screenings. What a treat to watch a film and then be face to face with the director, the person who toiled untold months and years, working through the conception of the film through painful completion. And was there along every single shot of the film you have just seen. And to have this person describe the movie to you and answer audience questions in their own words. It is like using the microwave, and then after your food is warmed, to have the inventor of the microwave show up in your house to explain any questions you might have!

iTunes has a section called "What We're Listening To" which is useful. Made me want to create one of my own. Here is stuff that is getting most playtime on my iTouch of late -
Posted by Yazdi at 8:43 PM No comments:

What I have been watching - September 2009

iTunes has a section called "What We're Watching" which is useful. Which made me want to create one of my own.

On the big screen :

On the not so large screen (courtesy of Netflix and the cable company):

On the not so large screen (courtesy of airplanes):

We have all been there. Sometimes you want to see a good movie and there appears to be nothing appealing playing in the cinemas or at the video/online store. I try to avoid pushing movies on to others, but occasionally I do get asked to suggest something. We are past the middle of the year for more than a month now and for an obsessive List Maker like myself, it was time to post something. So forthwith, here is my completely biased and totally unscientific list of the better movies of the First Half of 2009 (January through July).


Honorable Mention: Adventureland, Away We Go, Departures
Posted by Yazdi at 9:02 PM 1 comment: