Whatever you may say about Enemy (and there is a lot to say; I cannot wait for the film to open) the new Jake Gyllenhaal mind-bender from filmmaker Denis Villeneuve (Prisoners, Incendies), the poster for the movie gets the job done.

The burden of a whole city rests on Gyllenhaal's head, and there's that spider that appears to be attacking what...the city? his mind? The pastel background, Gyllenhaal's downward glance, the melting edge of the head suggested by the jagged skyline; whatever it is, the poster manages to capture the meditative, surreal, mind-fuck tone of the film. 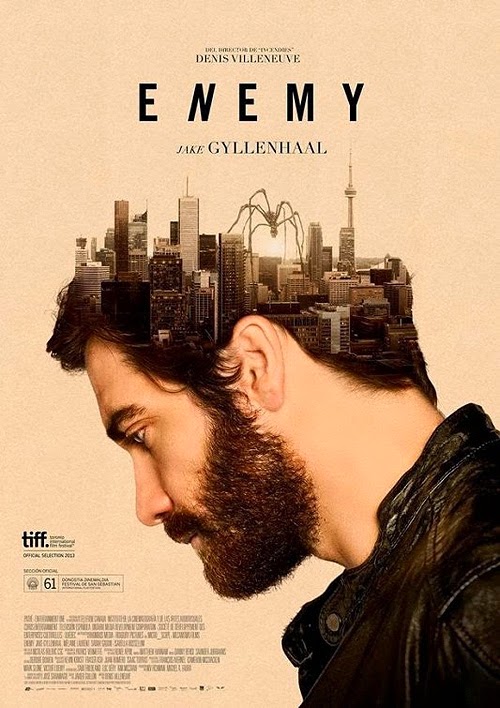 [This originally appeared on Moviewallas.com]

One of the best our city has to offer, the 2014 San Diego Latino Film Festival (SDLFF) is here.

Running across two weekends, the fest features an impeccably curated selection of movies that are likely to suit every taste. Whether you like mainstream cinema, or have an affinity for smaller independent films, or if you prefer documentaries, you will find all manner of gems. And that doesn’t even include the short films program, the Cinegay selection, or the special program of films from Chile that are being highlighted at this year’s SDLFF.

Some people give me a funny look when I mention film festivals. If the idea of seeing a movie at a film festival seems too particular, or too intellectual, or too fringe, can I please assure you that it is none of those things. You show up and buy a ticket just like you would for any other film. You are more than likely to have the filmmaker or cast members in attendance. And witness a Q&A session with them at the end of the screening. Where else can you get the opportunity to hear directly from the creators of a film you have just seen. In many instances, this may be the only opportunity to watch the film because the film may not get subsequent wide distribution. Also if you tell yourself that none of the films will be of interest to you since you are not latino, then you will be dead wrong. Three of the films screening here are already on my list of the best of any films I have seen so far this year.

Below are some of the films that are playing at this year’s festival. It is only when I listed them together that I realized that are all strangely, in one way or another, about brothers and sisters.

SOMBRAS DE AZUL (Shades of Blue, Mexico): A young girl shows up in Havana for the first time, and settles down to spend a few days in the city. As she starts to roam the Cuban sights, you realize from her mental conversations (directed to a lover? father? friend?) that she has run away from her past life. She frequents the city attractions, spends time with another resident at the lodging house, and finds herself surprised at developing a friendship with a local man who she first met when he tried to steal her camera. Part travelogue, part confessional, and altogether authentic, the experience of a person in a strange new land amounts to a film of unexpected depth. This is assured, confident filmmaking, characterized by remarkable acting. An example of how the honest and truthful telling of a personal story is all it takes for a movie to hum with universal truths. What a remarkable achievement this quietly devastating film is.

STAND CLEAR OF THE CLOSING DOORS (USA): This is another stellar example of an immersion in the lives of a few individuals that results in a greater understanding of what it means to be human. Mariana is a single parent who makes a living cleaning homes. At the end of each school day, her daughter is entrusted with bringing her autistic younger brother Ricky back home. One day, Ricky wanders off after school and doesn’t return home. How does a parent deal with the nightmare of a lost child, as hours slip into days? How is a mother to forgive her daughter for the consequences of her carelessness? How is a severely autistic child to come home when he isn’t wired to be able to do so? Who can you truly rely on in a difficult time, particularly if you are stationed close to the bottom of the socioeconomic ladder? Austere, stark, and almost documentary-like in its quiet observations, this film demonstrates that the best cinema places you squarely in the shoes of someone else and lets you breathe that person’s existence. And by doing so, moves you to contemplate your own place in the world. It absolutely breaks my heart that a film as undeniably brilliant as this will not get a tenth of the exposure it deserves. At the film’s conclusion, the audience I saw it with leapt into applause. I couldn’t join them because I was too choked up to respond. This film is the reason we bother to watch movies at all.

LAS ANALFABETAS (The Illiterates, Chile): This film is a character study of the kind of person we seldom see films pivot around: an irritable, impatient, prickly, and proud individual. The kind of person who has decided that they will not (can not?) play by the rules of society. The kind who is deeply, resolutely set in their ways. And then consider the plot: an illiterate individual learns how to write. This could have been the sort of soggy, insufferable dredge that this premise might dictate, but the movie completely bypasses that trap. After her sublime turn in GLORIA, here is Paulina Garcia again in a completely different incarnation, shorn of all vanity and playing an individual that is instantly recognizable. The film also has the good sense to not provide every answer, leaving it up to the audience to contemplate the reasoning behind certain actions. A movie will stay with you longer if you are left with just enough ponderables to keep you wondering.

HELI (Mexico): This film nabbed the best director prize at the Cannes Film Festival last year. And I can see why: it creates some of the best sense of foreboding that I have seen in a movie in some time. It is that feeling that something truly awful is going to happen any moment – that is sustained through much of the narrative. This film will resonate with those who admire darkly bitter, deeply violent films. From the very first scene that elicited a gasp from the audience in the screening I attended, this film is unrelenting in its single-minded pursuit of exploring the worst in human behavior. Set in a deeply rural Mexico where government and lawlessness coexist as one, the film revolves around a family whose lives implode when the teenaged daughter has the misfortune of falling for a young army cadet who tries to get away with a stolen batch of cocaine from his superiors. Pulpy and gonzo, the film may not be for everyone, but there is no denying the high voltage charge it carries. 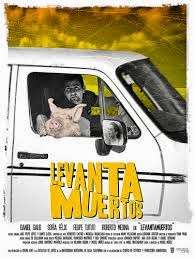 LEVANTAMUERTOS (Death Strokes, Mexico):  This films clocks a few days in the life of a man who works in a coroner’s office. Frequently dispatched to take care of bodies of the recently deceased, things get into a tailspin when he is forced to use many of his vocational skills to conceal a death that may have occurred at this hands. Like HELI, this film carries a foreboding air that is heightened by a morbid tone and dark humor. The relentlessly scorching summer heat in the small town in Mexico that this film is set in almost justifies the extreme actions of many of the characters. Had this film been able to build on these characters and setting, it would have been a great Lynchian outing. But even though the film loses some of its power in the last act, it makes for a good ride to the dark side.

MY SISTER'S QUINCEANERA (USA): A latino family in a small American town is the focus of this film which observes them in the week leading up to the quinceanera of the oldest daughter. What is refreshing about this film is that everyone in it is inherently decent; there are no bad characters here. The younger sister feels a little left out since her turn for a quinceanera is yet to come. Her older brother hangs out with his best friend and is trying to hold off the onset of adulthood and responsibility as much as possible. This is one of the better depictions on film that I have seen of the struggle to decide whether to remain in the same small town one has grown up in versus escaping to another place for college.  The film has a wonderful, gentle understatedness about it; there is nothing overly dramatized or shrill in the movie. Also there is a naturalness about the actors, maybe because many of them are related in real life. This is a quiet gem of a film.

Yes...but not for this film

I have already wondered and vented about this year's Oscar nominations. But one final thought.

Is it just me, or did it seem like there was a preponderance of acting nominations that were deserving, but curiously for the wrong film. This happens often enough. Kate Winslet got nominated in 2008 for The Reader when she was far more indelible in Revolutionary Road. Nicole Kidman was nominated seven years earlier for Moulin Rouge when she had already put in a far more controlled, considered performance in The Others.

This year there were many examples of misspecified nominations:

The Oscar ceremonies will be upon us in a few days, and this is enough ink spent on ruminating about the nominations already. Lets find out how the reality of the wins match up against the endless prognostications that have been going on for entirely too long.