If you are based in Canada, and specifically a Toronto denizen, you are in for a treat. 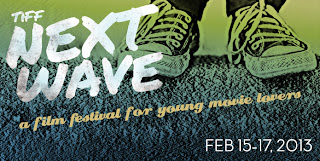 Starting Friday, February 15th, the good people at the Toronto International Film Festival (TIFF) have organized the TIFF Next Wave Film Festival. And the theme for the fest is young movie lovers. It includes an enviably well curated selection of movies featuring the young in cinema. The full schedule can be found at http://tiff.net/nextwave. All films will be playing February 15-17th at the festival flagship venue, the TIFF Bell Lightbox.

In addition to the film screenings, there is even a 24-hour film challenge. According to the website, "TIFF Next Wave challenges teams of high-school-aged youth to make an original short film in just 24 hours, from 6pm on Thursday, February 14 to 6pm on Friday, February 15, just in time for Battle of the Scores. All films that meet the competition criteria will be screened at TIFF Bell Lightbox on the closing day of the TIFF Next Wave Film Festival, Sunday, February 17."

No festival of films about the young can be complete without screenings from the John Hughes pantheon. And the TIFF Next Wave Film Festival has one-upped the stakes by a full on John Hughes Film Marathon as part of the fest. Even better, high school students can attend the Hughes marathon free.

One of the films I viewed at the 2012 TIFF was the Spanish language movie Promocion Fantasma (Ghost Graduation).  A half-hour into the movie, I stopped analyzing the film and surrendered to its silly, giddy charms. An homage to the John Hughes films from the 80s, Ghost Graduation is one of the featured films at the TIFF Next Wave Film Festival, playing on Sunday, February 17th at 2:45 PM.

Here is what I wrote about Ghost Graduation in my 2012 TIFF write-up:

"If your list of comfort-food movies invariably includes films from the eighties, you will be sure to love Ghost Graduation (Promocion Fantasma). This is a light-hearted piffle of a film that only exists to get as many laughs as possible as it (re)visits the John Hughes universe. The director of this Spanish-language film, Javier Ruiz Caldera, mentioned in the Q & A after the film that the plot emerged from the premise of what might have happened if the characters from The Breakfast Club never got out of detention but died and were stuck as ghosts in their high school for the next twenty years. In this film, a school teacher who can see the dead has to help these ghosts resolve unfinished business so they can move on and stop haunting the school. The reason why Joss Whedon was the apt choice to make The Avengers is because he is a geek about the universe of these comic books and he gets these characters. A filmmaker who taps into his own outsized love for a particular story or genre will always do a better job than another who does not have that love, no matter how technically accomplished the latter may be. Well, here is a filmmaker who gets those seminal films from the eighties and he nails that sensibility in his own directorial debut. At the TIFF screening, he got a long round of applause at the end of the film. Sometimes all you need to do is make a film about something you love, and the rest takes care of itself.

Incidentally, I wonder if John Hughes will be someone whose cache will continue to grow in coming decades. He is not typically invoked during mention of the cinema greats. We will find out, but I suspect time will be kind to the legacy of John Hughes films".

I am glad to see that the TIFF Next Wave Film Festival is already doing its part to keep the Hughes legacy relevant to a new generation of movie lovers.

An unscientific, biased and sometimes mean-spirited tally of cinematic observations from 2012