Worst of 2015 | Movies | Most Disappointing Films

As wondrous and giving as 2015 was for movies, it wasn't without its share of disappointments. And here is my list of the top disappointments. Even within this list, most films just didn't match up to (perhaps impossibly high) expectations. Except for the top three; those are legitimately awful.

10. TERMINATOR GENISYS. A well-intentioned botch-up, but a botch-up all the same. Other than the anything-goes juggle act that was the script (which brazenly disregarded the legacy of these characters), the most damaging of all was the casting of Emilia Clarke as Sarah Connor. Please understand that Sarah Connor doesn't giggle; even as a teenager, she doesn't.

9. BLACK MASS. Was there a film this year with more grand showboating? Try as he much, poor Johnny Depp is unable to rise above his near comical physicality: a prosthetic forehead and blotchy cirrhotic skin. And can we please say a prayer for the mobster film genre and call it officially dead. Its all been done now. If you must watch this film, do so for the female performances from Dakota Johnson (you read correctly), Julianne Nicholson and Juno Temple, who make much out of minimal screen time; the rest of the film amounts to a pissing contest between an admittedly stellar male cast (Depp, Joe Edgerton, Benedict Cumberbatch, Kevin Bacon, Peter Saarsgard, Jesse Plemons, Adam Scott and Corey Stoll).

8. JOY. This isn't a bad film. It is just a little heart-breaking coming from this director and this cast. As enjoyable as the film is, and as reliably alive as Jennifer Lawrence's lead performance is, this ultimately comes across as a story not worth telling.  What was it about the real-life Joy Mangiano that drove David O. Russell to make a film based on her life. She was a struggling housewife who built an empire from inventing and then cannily marketing the Miracle Mop. But there are a hundred Joy Mangianos in the real world; the Lifetime network on television is devoted specifically to stories about them. Maybe it is the treatment of the material. The voiceover from the dead grandmother (Diane Ladd) is frankly pointless. The TV show-within-the-film device that kicks off the movie is odd and demeaning to the Virginia Madsen character. The Robert DeNiro and Bradley Cooper characters are cardboard cutouts (remember their crackling work in THE SILVER LININGS PLAYBOOK?). And any film that doesn't know what to do with Isabella Rossellini is committing high crime.

7. CONCUSSION. Oh this film has a big heart. But in its earnestness, it loses sight of objectivity. The last thing a film with a cause should do is to put its protagonist on a pedestal. And that is exactly what CONCUSSION is hell bent on doing for most of its running time. It all but canonizes Bennet Omalu. This topic deserves a better film, an angrier, more lived-in film ready to embrace real-life contradictions, instead of the diatribe that CONCUSSION amounts to. And what a perfectly good waste of Albert Brooks. And Gugu Mbatha Raw too.

6. FANTASTIC FOUR.  This is not the full out disaster they would have you believe. Set aside the naked greed in financing yet another reboot of this story. But you can almost chart the filmmaker slowly losing grip on the material, starting at the halfway mark. As if he just gave up mid-film. Some day, director Josh Trank will reveal the horror that must have been the making of this film. The one silver lining in all this: no sequels means there will be fewer Miles Teller movies the world will be subjected to.

5. RICKI AND THE FLASH. This film, the very air it breathes, seems incongruous with the person who helmed SOMETHING WILD, THE SILENCE OF THE LAMBS and MARRIED TO THE MOB. There is something to be said for an unconstricted, free-form telling of a story that Jonathan Demme used to great effect in his last outing, RACHEL GETTING MARRIED. Even a fraction of the bite and rawness from that film would have been life-saving for RICKI AND THE FLASH.

4. THE HATEFUL EIGHT. The first part of this film is genius. I have written about the issues I had with the rest of the movie.

3. ME AND EARL AND THE DYING GIRL I was only marginally annoyed when I first saw this film, but with time I have grown to fully loathe it. It barters the sort of small film tropes that gives indie cinema a bad name: the too quirky by half characters, exhausting hipster references, and the kind of dialog that nobody in real life ever utters. But most egregious of all, is the film's dishonesty. A filmmaker has the right to pawn all the emotional duplicity at their disposal to extract a cathartic response out of the viewer, but I would prefer not to be jerked around like that, thank you very much.

2. SOUTHPAW. This is stupid miserablist nonsense. A puffed-up, inferior remake of ROCKY. One need only compare this to CREED to realize the emptiness of SOUTHPAW. It pains me that Jake Gyllenhaal was associated with this nakedly manipulative film that has nothing besides hypermasculine posturing to show for itself.

This year's Oscar ceremonies are nigh. Someone asked me earlier this week why THE HATEFUL EIGHT didn't fare better with Oscar nominations. It managed only three: Best Female Supporting Actor, Best Original Score, and Best Cinematography. None in the lead acting categories. Not one for Best Director. And in the biggest snub of all: no nomination for Best Original Screenplay. I think I know why. 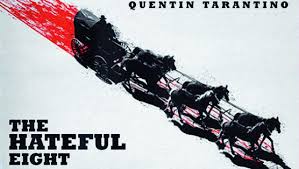 Every new Tarantino film is cause for celebration for cinephiles even while each of his films has almost always been polarizing. Still, THE HATEFUL EIGHT falls short of being a great film.

Tarantino has always been an indulgent filmmaker and his excesses are the reason why he is beloved, but this is the first film where his unchecked tics and fletches, his demons and obsessions, derail the movie. Ultimately, fatally so. DJANGO UNCHAINED got dangerously close to crumbling under the overwrought Tarantinoisms, but somehow managed to stick a landing. But not this one.

Most of early THE HATEFUL EIGHT is terrifically compelling. I will go as far as to say that the first two thirds is genius, with the sort of dialog that reminds us why Tarantino is an essential American filmmaker. Those parts create a sort of stage-play intimacy and directness, an oppressive suffocation seen in only the best kind of theater, where you know that these contrary, conflicted, all too human characters cannot possibly breathe the same air much longer. And that an emotional implosion is imminent. That Tarantino creates this so beautifully in the first two hours of THE HATEFUL EIGHT makes it all the more aggravating to watch what transpires in the last hour. It is akin to watching someone create the most complicated, most precariously balanced, most perfectly scaled sand castle. And then to see them kick that sand castle to the ground. Or worse, watch them piss over it. I say this not to be dramatic; I say it because it is the closest analogy I can come up with to describing my actual filmgoing experience with THE HATEFUL EIGHT.

So here are eight reasons why THE HATEFUL EIGHT will not be invoked in the first breath of future filmgoers enumerating Tarantino's best work.  A word of note that everything that follows divulges major plot turns, so consider this your fair and final SPOILER WARNING. 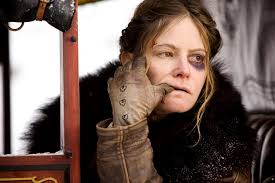 Everyone creates their end of year list of favorite films, and that is well and good. But year after year, the most exceptional movies I watch are at film festivals. Since these films have not, in most cases, yet received theatrical distribution they are often left out of the end of year discussions. Which is frankly unforgivable. And it is the reason I have been creating a separate list of favorite films watched at film festivals.

Over at Moviewallas, our voices have gone sore from exhorting listeners to attend film festivals. Any film festival. If you can get yourself to one of the more prestigious ones, that is terrific; but we do not always have the time to make an out of town trip specifically for a film festival. So I say, start close. Start at home. Start with your local film festival. Besides, your hometown festivals need all the support they can get. It is not trivial to curate and program a film festival, get permissions to screen the films, and arrange the logistics. And the least we can do is to show up.

I make it sound like film festivals are bitter medicines to be swallowed for the greater good. Perish the thought. The film festival experience can truly be exalted; I recall my first festival experience as being akin to a religious awakening. There you are getting to see a film before anyone else. Bragging rights aside, what is better than annoying your friends with recommendations of films they must watch in the future. Second, movies shown at film festivals bring the filmmakers with them. Most film screenings are followed by a Q and A with the director and often the cast. Talk about annoying your friends now, with casually tossed references to that time Tom Hardy gave a really witty answer to an audience question. And then there is the matter of access, that you otherwise just would never be able to tap into. Foreign films, independent films, commercial films, documentaries, short film programs, retrospectives, they are all part of the festival experience.

And finally, and most depressing of all, the film festival may be the only place to view some of these gems. And I am talking about high quality movies, which due to the terrible evil that is the American film distribution system, will never show up in a commercial theater in your hometown.

I know that much of this sounds terribly preachy. But if you ever have the slightest curiosity about a film festival, I would urge you to give it a try. With that PSA out of the way, let me jump into the best films I saw at film festivals in 2015: 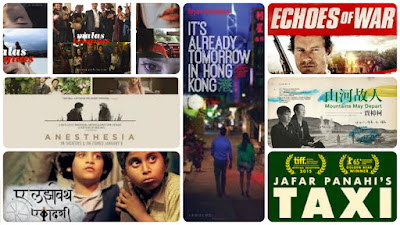