My Evening with Moushumi Chatterjee

One of the first things Moushumi Chatterjee declares when I see her is that she is exasperated with kids these days spending all of their time on the computer.

And it is surreal.

Growing up as a child, I wouldn't have believed it if told that I would one day sit across from Moushumi Chatterjee and have a conversation with her. She, of that ebullience. She, of that famous, high wattage smile. She, who was endeared further to the Indian populace by those signature crooked teeth. Of this are movie legends made. In the last three decades, Chatterjee has worked with every actor of any reckoning within the Hindi film industry, from Bachchan to Dharmendra, and from Rajesh Khanna to Sanjeev Kumar. She has been in more than her share of blockbusters and smaller films alike; the Internet Movie Database (IMdB) credits her as having acted in 97 films. Anyone who came of age in the 70s or 80s in India knew her as unquestionably as knowing Monaco biscuits.

I grew up in a family where cinema was religion. We watched films regularly, if not most weekends in the theaters, then certainly on television. Movies were in our bloodstream, the legendary actors as familiar to us as our own relatives. Hindi cinema then was at its pulpiest best. Lives were arranged around the release schedules of anticipated films, and movies played in cinemas for six, ten, twelve months at a time. People purchased sold out movie tickets from scalpers outside cinema halls by paying up to three, five-times the original price. And Moushumi Chatterjee was a part of the thriving industry then.

Some time back, when a dear family friend who lives in the Bay Area happened to casually mention that she grew up in Bombay in the same building as Chatterjee, I begged her to orchestrate a meeting with her. And the friend's brother and sister-in-law who continue to live in that building in Bombay, bless their hearts, made arrangements to have Chatterjee over at their home one evening when I was visiting Bombay. I was invited too, and before I knew it, there was Moushumi Chatterjee rolling her eyes about the younger generation. How can you spend your whole day in front of the computer, locked up in a room, she asks.

She is dressed in a rich, silk churidaar and it is evident that time has been uncommonly kind to her. During the evening, she speaks freely and without stiltedness which is surprising considering the strangers in her company. She is a natural conversationalist. At one point she asks me without preamble, or pause: Why aren't you married? Don't you want kids? Are you gay? Why are you still single? I consider that perhaps over decades of being grilled by the ruthless Indian media, she has learned to throw the interviewer off by asking them the questions instead, give them a taste of their own medicine. It seems to work, because I find myself uttering tired cliches....haven't found the right....better to be single than married to the wrong....still looking...... But then, I look at her face and realize that no, that isn't it; her questions are not ill-intentioned. She seems genuine in her interest in my personal life. She acknowledges how difficult it is to find the one, and how her quest continues even now. That here she is, obviously content with her marriage, while simultaneously acknowledging that there might be someone out there still who could be her soulmate, speaks to uncommon sophistication in thinking. 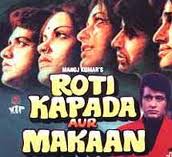 When I tell her that I live in San Diego, which is a two hour's drive from Los Angeles, she perks up. She mentions about her recent visit to LA, and recounts that she ran into Goldie Hawn at a yoga retreat there. That's two people I would not have guessed to connect.

More than anything, it is her candidness that amazes me. She talks genuinely about spirituality and how one needs to be grounded in one's beliefs before one can have peace in life. As the evening wears on, she mentions how she has always counted her parents as her gurus, particularly her father. It is evident her parents have always been a ballast in her life. Knowing that Chatterjee had her fill of scandals in the seventies and eighties, providing enough ink to fill countless pages of Stardust and Filmfare, I start to appreciate that she has likely always struggled to bridge her progressive thinking with the firmly rooted principles espoused by her parents. It must not have been easy, but she has prevailed. 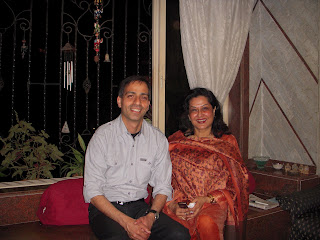 She mentions that she is a morning person, has always been one, and enjoys her early dawn walks more than anything else. And I wonder, in the hurly burly of Bombay, particularly in the tony part of town where she lives, how can she possibly go for long walks without getting mobbed. She is very recognizable and that face cannot easily blend in with the high profile joggers of her neighborhood.

She speaks about how everyone still calls her by her real name, Indu, and that it was one of her early directors who gave her the screen-name Moushumi. She talks fondly about the actress Shammi, as well as about her father-in-law, the music director, Hemant Kumar. And once again it feels surreal that names that I have considered legends growing up, are simply close family and friends to her. She speaks with pride about her daughter Megha, herself an actor in Indian cinema now. Which oddly reminds me of one of Chatterjee's more memorable musical numbers, Megha Re Megha Re, from Pyaasa Savan (http://www.youtube.com/watch?v=ApaEgkETt2w).


I ask her about Deepa Mehta whose film Hollywood Bollywood she appeared in not too long ago, and whether more films with Mehta were on the horizon. But she indicates that she has not recently been in touch with the director. For someone who has been in almost a hundred films, I wonder if there is still the thrill of starting a new film. Chatterjee after all made her film debut in 1969 with the Bengali film Balika Badhu and started her Hindi film career with Anuraag (http://www.youtube.com/watch?v=alF3RmIIaPI; http://www.youtube.com/watch?v=hZ4q0pcKqyU&feature=relmfu). Her part in Manoj Kumar's Roti, Kapada Aur Makaan remains one of her more memorable roles. She has done her share of running around trees and was an active participant during one of the most joyful phases of Bollywood in the late seventies, when movies of the giddiest, purest entertainment were being made. I am sure she has some stories to tell. 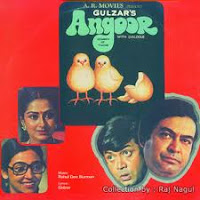 The evening wears down quickly and on my way back home that night, I recall how unguarded Chatterjee had been the entire time.  I could be wrong but she appeared happy that her evening company was so happy to see her. It is only when I reach home that I bang the palm of my hand against my forehead. I completely forgot to bring up Angoor, arguably a contender for the funniest Hindi movie ever made, in which Chatterjee starred. How can you meet the actor who is in one of your favorite films of all time, and forget to tell them how much pleasure the movie has brought you. Regret is a bitter pill to swallow.
Posted by Yazdi at 10:49 PM No comments: