Of all the genres in all of cinema, my favorite is coming-of-age films. Because when done right, they can reflect on life just about better than any other art form.

THE WAY HE LOOKS, Brazil's entry to the Oscars

THE WAY HE LOOKS  (Hoje Eu Quero Voltar Sozinho) is Brazil’s submission to the Best Foreign Film category at the 2014 Academy Awards. By the third scene in the film, I had decided that I had unreasonable love for this film, and from that point on, it did not once betray my judgment. Written and directed by Daniel Ribeiro, it tells the story of Leo (Ghilherme Lobo) a somewhat shy teenager. He is blind and aware of his place in school due to his disability. His parents want to protect him even as they struggle to let him be independent. Leo’s best friend since childhood has been Giovana (Tess Amorim) and the two are inseparable. In many ways he sees the world through Giovana’s eyes. One need only watch Giovana looking at Leo to know how she feels about him. Enter the unreasonably amiable new student at school, Gabriel (Fabio Audi) and Leo and Giovanna’s friendship may need to be redefined.

Nothing in this film is what we haven’t seen before. And yet, the film is written, acted and played out with such a matter of fact honesty and simplicity that it rises up to be one of the better films of the year. We have seen these young love triangles a hundred times before. Jules et Jim kicked off the entire French New Wave for crying out loud. We’ve seen well-meaning coming of age films do an admirable job again and again. But it is the control over this material that singularly elevates this film to something of a discovery. The refusal of the film to make a big deal about developments is what is truly surprising, in comparison to say Blue Is The Warmest Color from last year, which carried an unbearably heavy agency about it. The Way He Looks makes its observations without fuss, without drama, and without prurience. So what if the lead character is blind. So what if he happens to fall for another guy. Without tilting into caricature, the film strikes authenticity while never submitting to melodrama. One The Way He Looks can do more good than a hundred after-school specials about tolerance. 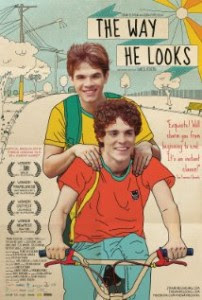 Who hasn’t experienced the dynamics with a friend change due to the necessary introduction of a new person. Best friends get married. They move to other cities. They follow other professional tracks in life. In recent years Frances Ha and Bridesmaids has dealt with these situations with some degree of depth. But see how the material is handled in The Way He Looks; the respect the script grants these characters, to be contrary and complex, to be hurt and to stumble, and to grow and find their footing, is something to behold. To watch a movie capture this universality on screen without heavy chest-beating is a minor miracle.

Like the best films, this one is populated by characters who are for most part, all inherently good. Which is like life; people we interact with in the real world are seldom all out evil. Films that understand this and refuse the easy out by creating conflict through a single malevolent character are already leagues ahead of other movies. See how this first time filmmaker, Daniel Ribeiro,  treats even the least likeable character, that of the school bully Fabio. He constantly taunts Leo. He is cruel, yes, but not necessarily because Leo is blind. It is because Leo is an easy target, a misfit, different because of his blindness. Fabio makes fun of Leo, first alone, and then when he is with Gabriel. And at some point the film asks the audience, do you want to be Fabio? Do you want to be this insecure person who is unable to accept anyone who is different? It is strikingly mature handling of this material, when it would have been so much easier for the film to simply paint Fabio as a villain.

If there were justice in the world, this script would get nominated for year-end awards. Watch this film if only for its writing, particularly with sly observations about how the world deals with someone who is visually impaired. And like the no-fuss aesthetic of much of the film, it does not linger on the dialog, as exacting and truthful as it is. When Gabriel is first making friends with Leo, he asks Leo if he has noticed something in a particular movie. And then realizes with a start that Leo couldn’t have seen the film since he is blind. Leo isn't offended, and Gabriel takes him to a movie instead, where he explains the film to him in whispers. Touches like this make you realize that this is the work of a gifted storyteller.

Any lover of good films should make plans to watch The Way He Looks because of all the things it gets right. It gets the acute hurt that a person with disabilities feels when they are made fun of. It gets the love of parents who are protective of their child and the horror they must feel to forfeit what part of their child’s environment they can safeguard from harm (another masterful film Margarita, With A Straw, which screened at the Toronto International Film Festival this year, also dealt with this situation with uncommon empathy). Most of all The Way He Looks is worthy of veneration for how it makes a hero out of Giovana, because it gets that best friends and real friends will sacrifice their own thumping affections for the sake of their friend’s happiness. The film gets the hesitation, the tentative thrill-and-despair dance of acknowledging first love, just right. It gets just about everything right.

Yes The Way He Looks may just be a film about a teenage love triangle set in Brazil. But it is the best example of its kind to make you realize that sometimes a truthful story told with a good heart is all it takes. The hell with CGI. The hell with histrionics. The hell with unnecessarily complicated non-linear, non-narrative mumbo-jumbo. Give me something as simple and well-intentioned and humorous and kind as The Way He Looks any day of the year. When films these days are seemingly only interested in hipster posturing and cynicism, the most provocative thing of all may be a film that gifts viewers with genuine sweetness.