[Note: An original version of this post appeared on www.moviewallas.com]

Here's my final update from the 2012 Toronto International Film Festival. You arrive eagerly in Toronto one Friday night, you watch three to four films a day, and before you know it, the last movie on your list is rolling its end credits. And its time to say goodbye to the festival, and get on a plane and head back home. There could have been a hundred other combination of films I could have picked to watch during my time in Toronto (there are more than 400 films screening this year at TIFF). But by all accounts, the ones I chose left me fully sated and then some.

There are three TIFF offerings to discuss in this final update. One greatly anticipated film that did not live up to expectations. One relatively unknown film that knocked my socks (and my shoes, and my shirt, and my pants...) off. And a program of short films whose quality covered the spectrum of everything in between. 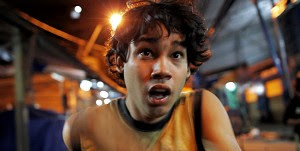 Almost every year, a movie comes out of nowhere, and becomes part of the popular consciousness. If there is justice in the world, 7 Boxes will be that film this year. TIFF prides itself on discovering what it calls 'the next big film', citing Slumdog Millionaire and The King's Speech as examples. The kind of movie that gains traction through word of mouth, opens in arthouse cinemas, and then rapidly expands to mainstream theaters. 7 Boxes more than deserves this fate.

Here is the premise of 7 Boxes (directed by Juan Carlos Maneglia and Tana Schembori): in a teeming shanty market in Paraguay, seventeen year old Victor is one of many people making a living by carting merchandise on wheelbarrows through the maze of busy streets. One evening he is asked to deliver 7 wooden boxes to a location he will be informed of at a later time. Hoping to finally be able to afford the used cell-phone he has been lusting after, he accepts the task. And thus begins what will be the breathless remainder of the film as Victor realizes that there are many who will go to any extreme to get their hands on the 7 boxes. If this film sounds like a Premium Rush knock-off, let me assure you this is a far smarter, grittier and layered movie that is as close-to-the-ground unpolished and hard-scrabble as they get. The more relevant comparison would be with Run Lola Run which also featured a protagonist persistently on the run against time. 7 Boxes features an ingenious plot (wait till you find out what's in the boxes) that expertly weaves together more than a dozen characters who interact in unexpected ways in a story that is as labyrinthine as the market streets through which Victor dashes with the seven wooden crates tethered to his wheelbarrow. Every actor here achieves a reality to their character that makes it impossible to imagine them in other roles. 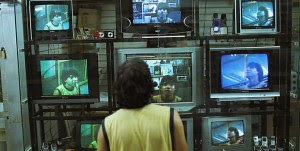 We have seen movies like this before, but ultimately what elevates this film is the notes of cleverness that are liberally scattered throughout; this is the work of unquestionable talent. To give an example, there is a scene in the film where in the middle of his running, running, running, Victor stops outside an electronics shop to catch his breath. There are multiple televisions in the storewindow, each fitted to a camera. As he sees his face projected through multiple perspectives he can't help but stare, probably seeing his face from so many angles for the first time in his life. Something terrible has happened immediately before this scene, but Victor stops for a moment to stare. To be a kid. To be a human being, suddenly fascinated by something simple. It is touches such as this which demonstrate that this is the work of a gifted filmmaker. All of the pieces of the plot ultimately snap together with a pleasing click, and the movie has a final scene so perfectly rendered it had me cheering at the screen. To discover a movie like this is the reason one goes to film festivals. Unpredictable, frenetic and utterly entertaining, this folks, is how you do it. 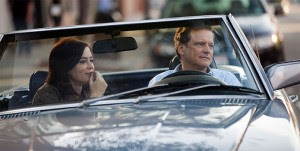 If the idea of a film with Colin Firth and Emily Blunt excites you (and it should) then it may be best to skip to the next paragraph in this post, because there is no way to talk about the film Arthur Newman without giving away key plot elements. Okay, consider yourself warned with the requisite Spoiler Alert. Arthur Newman is a film about two disaffected souls who bond. With the hazy, occult, undefinable connection between two strangers as its main focus, Arthur Newman evokes Lost In Translation set in small town southern america. But this film has an even more melancholic tone, if that’s possible. In A Ladder Of Years, an Anne Tyler novel, one day a woman leaves her family, drives to a new town, and sets up a completely new life there. This movie starts with the Colin Firth character, a one-time accomplished professional golf player, doing something similar, i.e., he devises a plan that would lead the world to believe that he may have taken his life and drives off to another town after taking on a new name: Arthur J. Newman. We find out as the film progresses as to what might lead a person to abandon their existing identity and willfully take on a new one. Blunt plays a woman coming undone; she has a car crash while drunk, is arrested and then needs to be hospitalized to be revived. She joins the Firth character on a road trip to Texas where he is headed to set up a new life. We will find more details about their lives as the film progresses. I thought I would never see the day but Emily Blunt is miscast in this role. I realize that she cannot always play the adorable ingénue in film after film and her risky, brittle, broken performance here is commendable, but the deliberate dimming of the considerable charms of this actor somehow seems wrong. This is a fairly dark film, and even its moments of levity are tinged with bitterness. I admired the meditative, despondent feel of much of the movie but the pervasive grimness of tone may make the film a hard sell. I was also disconcerted by the fact that even the most basic information about the lead characters is withheld through much of the first half of the film. The deliberate choice to only slowly reveal more information about them, may come at the cost of the audience’s patience. Overall I realize this is a brave film with a unique voice and resolute tone but it came across as a slight disappointment. 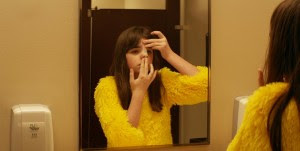 Planning to attend the Short Films program at a film festival is always a smart choice because you get the buffet experience: one gets to taste a little bit of everything. The short film compilation program I attended (Short Cuts Canada Programme #2) included seven short films. Hmong Sisters (13 minutes) focuses on an American tourist visiting rural Vietnam and comments on the adaptation and abuse of cross-cultural interactions. Struggle (Faillir, 24 minutes) brings honesty, an admirable lack of judgment, and clear-mindedness to a difficult subject matter: the sexual tension between two siblings. I was impressed by the naturalness of the performances, and the maturity in dealing with a topic that is frequently treated as untouchable. Life Doesn't Frighten Me (14 minutes) about the coming of age of a young girl who lives at home with her grandfather (played by the invaluable Gordon Pinsent) is effortlessly heartfelt, and was hands down the best short in the collection. The difficulty of doing a lesson-of-life type of film without coming off trite or obvious or fake or sentimental cannot be overstated. There are two moments in the film that pack a powerful emotional punch and the fact that this is achieved with remarkable economy of time speaks to everything that this short gets right. Asian Gangs (9 minutes) is a faux-documentary that hits every one of its funny marks. It works wonderfully (the audience was doubled over with laughter) because of the disarming sincerity of the lead actor (and co-director). The premise, to be seen to be believed, must have seemed so slight, so silly on paper, but what is captured on film comes out a winner. Tuesday (14 minutes) is a cute short about a young girl who is getting gypped in life at every corner, but her love of dogs will ultimately save her. Vive La Canadienne (3 minutes) is wordless and frothy and delightful in its simplicity. I have great fondness for films that play like the silents, and do not need dialog or cultural context to make their point and this film of barely a few minutes achieves that. Nostradamos (9 minutes), about a small Canadian town believed to potentially survive the end of the world, uses the same faux-documentary tone as Asian Gangs, but with a far more straight-faced tone.

And so comes an end to the films I watched at TIFF 2012. Is it too early to start counting the days until next year?
Posted by Yazdi at 6:19 PM