I will always gravitate toward smaller, independent films. But every year there are a few blockbusters that are not evil. Some even surprise us. I have already posted my overall personal favorite films of 2015.  Here is a list of favorite mainstream films of the year, in alphabetical order. When top brass studio executives go to bed, the ones involved in greenlighting these films ought to sleep well. 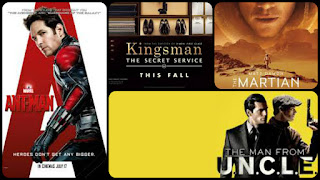 ANTMAN Talk about a challenge. Taking on a lesser Marvel character - someone able to shrink to the size of an ant - seems a surefire recipe for a disaster of a film. But somehow it all stuck together in ANTMAN. I want to shake hands with the person who cast Paul Rudd in the lead. And I want to pat the back of these filmmakers for not destroying entire cities in the climax, but have it instead be something that is the definition of inspired.

KINGSMAN, THE SECRET SERVICE. You want goofy and smart? You want a film that makes you smile as its cleverness holds strong, scene after inspired scene? What do you know, KINGSMAN gave us all that. By the time the finale rode along, it will feel good to submit with pleasure to the winking absurdity of it all.

THE MAN FROM U.N.C.L.E. Guy Ritchie brings an inspired, cheeky, impossibly stylish action movie that could actually have been made in the sixties. Forget the double and triple-crosses from the femme fatales, the real chemistry here is between the male leads (Henry Cavill and Armie Hammer).

THE MARTIAN Hardcore fans of the novel (I raise my hand) have found the science substantially dumbed down, and much of the despair of the lead character curiously whittled down, in the movie adaptation. But there is no denying Ridley Scott's wizardry with conjuring worlds masterfully (on Mars and Earth alike) to tell an inarguably entertaining story, peopled with tens of major characters. And the last fifteen minutes are crystallized adrenaline.

MISSION IMPOSSIBLE: ROGUE NATION. It is difficult putting out a quality product when you are in round five of a franchise already two decades old. But Christopher McQuarrie (EDGE OF TOMORROW) delivered a solid film, sharp, confident and relevant. Top marks too to the script-writers for a female character (Rebecca Ferguson) that is neither smitten nor needs rescuing.

SPY Melissa McCarthy should only ever work with Paul Feig. Because Lord knows everyone else in the business is bent on having her play some shrill, hateful caricature of an off-the-rails shrew. McCarthy is tremendous here in a deft little thriller, never more so than in scenes with Rose Byrne's arch Bulgarian villain.

STAR WARS: THE FORCE AWAKENS. Impossibly high expectations! The revival of dusty characters last seen decades ago! The need to self-correct course after Lucas' three subpar prequels! But J. J. Abrams' team somehow come through with an uncluttered but tight new chapter in the space saga that introduces shockingly well-realized new characters even while gently emulating the original film (A NEW HOPE). Thank you, truly, for not dashing our collective hopes. 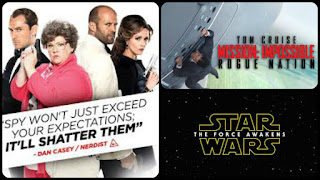