Thursday last week, I was a guest on a public radio discussion (KPBS Midday Edition) of the Oscar nominations which had been announced earlier that morning. Beth Accomando, the KPBS lead film critic kindly invited me. Maureen Cavanaugh, the host of the program asked us about racial diversity amongst the announced nominees.  All nominees in the four acting categories (Best Actor and Best Supporting Actor, Male and Female) are white. So which deserving actors of color should deservedly been nominated, Maureen inquired. And in the moment, the only name that came to mind was that of Michael B. Jordan in CREED. The challenges with being on live radio.

Since then, I have been thinking of other worthy actors of color who could have received nominations and there are many who  qualified: the earthy authenticity of Mya Taylor and Kikana Kiki Rodriguez in TANGERINE, the wily disquiet of Oscar Isaac in EX-MACHINA, the star-making turns from Jason Mitchell and O'Shea Jackson Jr in STRAIGHT OUTTA COMPTON, the altogether winning and sweet performance from Shameik Moore in DOPE, the goofy, lispy, bad-guy take by Samuel L. Jackson in KINGSMAN: THE SECRET SERVICE, or his guileless, contradictory, unforgiving central presence in THE HATEFUL EIGHT, the unconventional supportive ex-husband played by Edgar Ramirez in JOY, the glowing life-forces that were the five incredible Turkish actresses playing sisters in MUSTANG, the corruptor / corrupted pair of Idris Elba and Abraham Attah in BEASTS OF NO NATION. The list goes on and on. 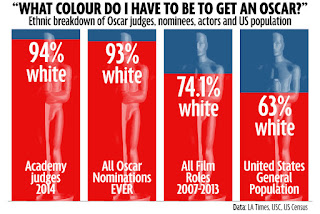 To be clear, I do not suggest that nominations be preferentially handed out to actors of color just to appease liberal sensibilities; I do not believe anyone is suggesting that. But the key question is this: within the pool of worthy contenders, is there a systematic bias against picking those of color? This is hard to definitively answer because each voting member's pick, is by definition, subjective and driven by personal likes. But what we do know are three incontestable facts. First, the Academy voters are predominantly older, male and white. Second, there were several deserving candidates of color in most if not all four acting categories. Third, no actor of color received a nomination in the acting category in the last two years. Make what you will of this; there is a reason why #OscarsSoWhite is resonating so strongly.

There were more than a few eyebrows raised last year, including at this site, when Ava Duvernay was left out of the Best Director nominations last year for her rousing work on SELMA. It quickly escalated to open outrage. And there is zero evidence that any correction has occurred in the twelve months since then.

It is Martin Luther King Jr Day today, and like many I wonder how much has changed in the wake of his legacy. The past year has seen some of the most upsetting and achingly repetitive dialog surface again about race in the national spotlight. It seems we keep saying the same things year after year to no real shift. Things have been particularly troubling at the volatile juncture of race and police brutality. 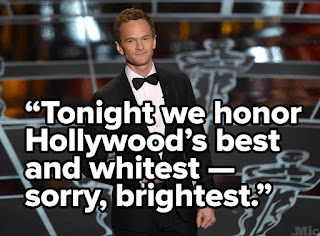 When it comes to films. Idris Elba made an impassioned plea this morning to the UK Parliament today asking for parity in roles written for (and awarded to) actors of color. His words ring with an urgent call to action even as he sounds exhausted uttering them. This is after all the year when Hollywood hired Emma Stone to play an Asian American character in ALOHA.  When Viola Davis won the Emmy this year, her speech cut through to the gist of the matter: "You cannot win an Emmy for roles that are simply not there", she said. [Here is one more of our finest actors, pushed like so many into television because Hollywood just cannot seem to find the right material for her in films]. The total number of films that were offered to Lupito Nyongo in the first six months after winning the Best Supporting Actress prize last year: zero.

Spike Lee, who is scheduled to be given an HonoraryAcademy Award at this year's event, announced today that he will not be attending the Oscar ceremonies as a protest to the all-white acting nominations; his announcement on MLK Day is no co-incidence. And it is not too difficult to empathize with his stance. In the decades since Martin Luther King Jr, how many steps have we taken forward and how many back.